Habitat fragmentation is linked with predator increase, in that birds are no longer as safe in small sites as in large. If shorebirds do move to large sites, this can be a dangerous change in behavior if more and more birds are concentrated in fewer and fewer areas. Any kind of natural or human-caused disaster at one of these places when birds aggregate can thus have an effect on a large percent of the population. However, what we do not know is whether or not there has been a concomitant increase in numbers at the large sites. Our radio-tagging studies over the next few years will address this question. 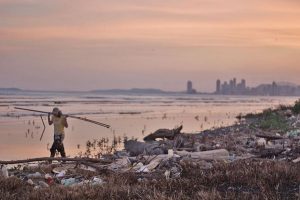 Many of the stopover sites are near large urban centers, or are in areas used by humans for recreation. Urbanization and human use have encroached upon historical habitats of these birds, with habitat fragmentation, destruction and conversion. Likewise, there is runoff from urban areas and adjacent agricultural areas as well as from golf courses.

Thus, direct or indirect loss of migration habitat has been extensive and continues to increase. Exempt sites are those on refuges, national parks, and on many Department of Defense lands. These are all mainly federal or state lands, and as such, they have more stringent legislation dictating what kinds of activities and uses can and cannot be done on them than do private lands. Generally, the public has access to refuge of national park land, although times and places of entry may be restricted, and DoD lands are usually off limits to the general public. In some areas like California, for example, where increasing use of wetlands by humans has resulted in habitat disappearance, fragmentation or contamination, the few remaining large wetlands are on federally protected lands—lands owned by the military. If not for partnerships among federal, state, and local governments and often non-profit groups, these wetland staging sites on the migration route of shorebirds would have probably disappeared long ago, or else would have been reduced tremendously in extant.